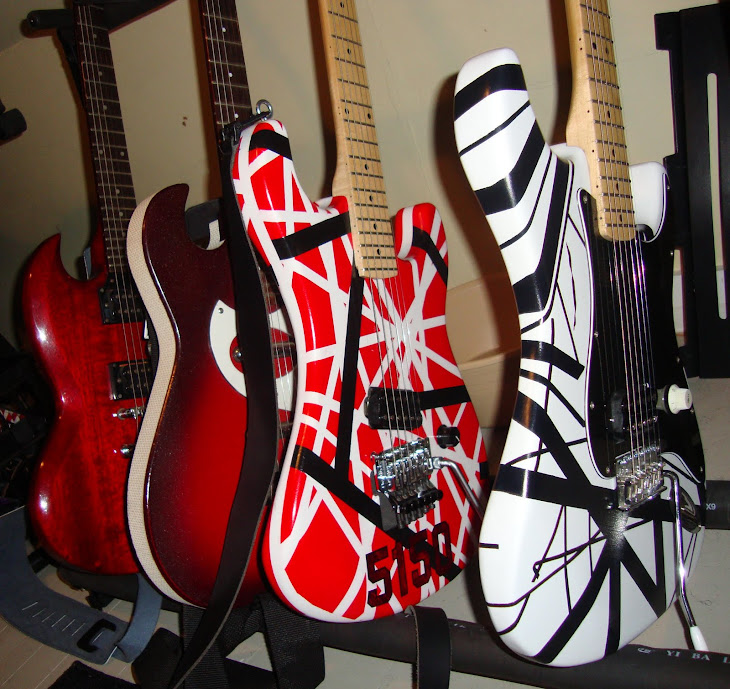 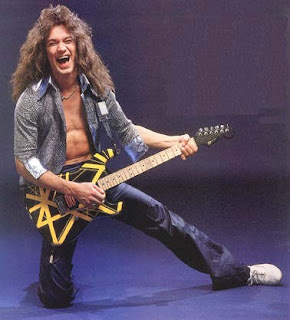 In 1979 Van Halen released their second album, Van Halen II, and Ed unveiled a new guitar with a paint job similar to the VH1 Frankenstein. This guitar holds a lot of history. It started out as a Charvel with a standard Fender tremolo bridge, and then came Floyd D. Rose. Mr. Rose was an accomplished machinist and an amateur guitarist who favored an aggressive style of play with lots of tremolo bar use. In the late 1970's, he became unhappy with standard Fender tremolos, and applied his engineering skills to develop a his own style of tremolo bridge. Hence, the Floyd Rose Tremolo was born. Although the first prototypes were installed on his own Gibson Les Paul, in late 1979 the first finished model of the Floyd Rose Tremolo was given as a promotional gift to Eddie, who installed it on this Charvel; THE first guitar to hold a Floyd Rose Tremolo.

(Above, the Charvel before the Floyd Rose) 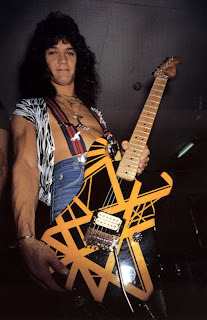 When the Floyd Rose was installed, Eddie removed the neck and replaced it with the neck of the VH1 Frankenstein, which he had modified to accept the Floyd Rose locking nut. For much, if not all, of the 1979 World Tour, Eddie played the guitar with this neck installed.
The original VHII Bumble Bee was buried with Darrell "Dimebag" Abbot, formerly of Pantera, who was murdered in December of 2004 while performing with his band Damageplan.

(Left: The Charvel hybrid with the Floyd Rose) 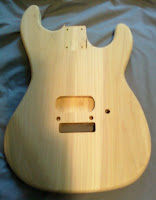 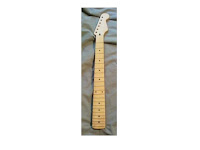 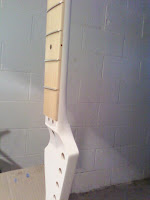 I sealed both with Kilz sealer... 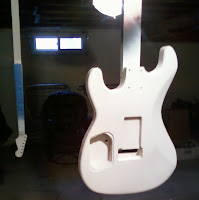 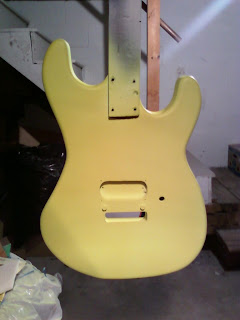 ...sanded down the sealer, and put 3 coats of flat Florescent Yellow on the body and flat black on the headstock and back of the neck... 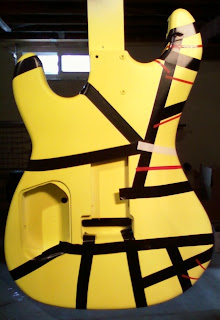 Unfortunately, the first paint job had alot of bleed on the smaller lines, so I stripped the paint, sanded down and started again. This time I still used 3/4" and 1/2" electrical tape, but for the 1/4" and 1/8" stripes I used auto-body "fine-line" tape . It was $9 a roll, but the second job came out much cleaner. 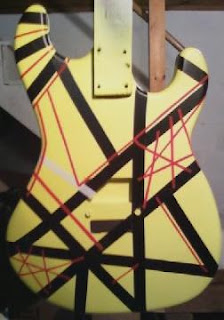 I learned that the trick to reducing the bleed is to take a card edge (or your fingernail) and snug the edges down where two pieces of tape overlap. This will close up the opening caused by the overlap so paint cannot get in there during the spray.

Next was 3 coats of flat black on the body...

...and peeling the mask. 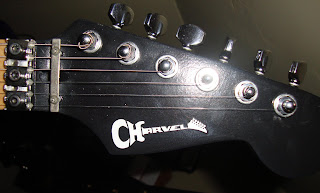 I drilled and recessed holes through the back of the neck to install the Floyd Rose locking nut, and added an 80's Charvel decal on the headstock, sealing it in with 6 coats of clear gloss, and added the Gotoh tuning machines from a 1980 Kramer that I bought on Ebay for the First Edition Floyd Rose that it had. The First Edition Floyd did not have fine tuners, and are a bit rare. I really lucked out finding this 1980 Kramer, and this F.E. Floyd is worth more by itself that I paid for the entire guitar.

(Below: My First Edition Floyd Rose) 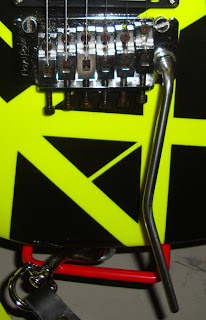 When I first installed the tremolo and strung it up, it would not stay in tune after using it, even with the locking nut. The blades of the bridge seemed to be getting hung up in about 5 different positions between flat and sharp. I did some research and found that on old tremolos like this: decay, corrosion or damage to the blades or the anchors will cause this to happen. Upon inspection, I found some minor corrosion on all the points of contact, but mostly on one anchor I found the chrome beginning to peel off. So I sanded off as much of the chrome as I could, dipped both anchors in Slick 50 Engine Treatment, and baked them in the toaster oven at 350 degrees for 20 minutes. This baked a teflon-like coating onto the anchors. I then reassembled the tremolo and spread some powdered graphite lubricant around the blades. After the working the tremolo about a dozen or so times, the bridge settled into the proper position, and the guitar stopped going out of tune. 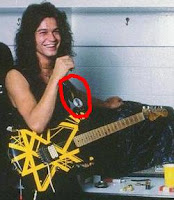 To add the finishing touch to this guitar, I had to build a replica strap. Eddie's strap was 2" black leather with yellow stripes and included his signature dog-clip and eyebolt locking system. You'll notice in one of the pictures above that he also had a button-style pin attached to this strap. 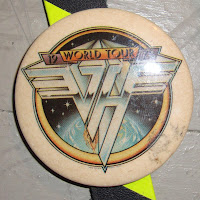 My replica is 2" black leather with florescent yellow duct tape stripes and dog clips. I hand peened the rivets to close the ends of the strap myself. I was unable to identify the button-style pin that Eddie wore, so I used this 1979 World Tour (VHII tour) pin that I found on Ebay.

Note: the picture above is the 3rd time I've painted this guitar!

~Notice the tone control potentiometer hanging around the back cavity~ 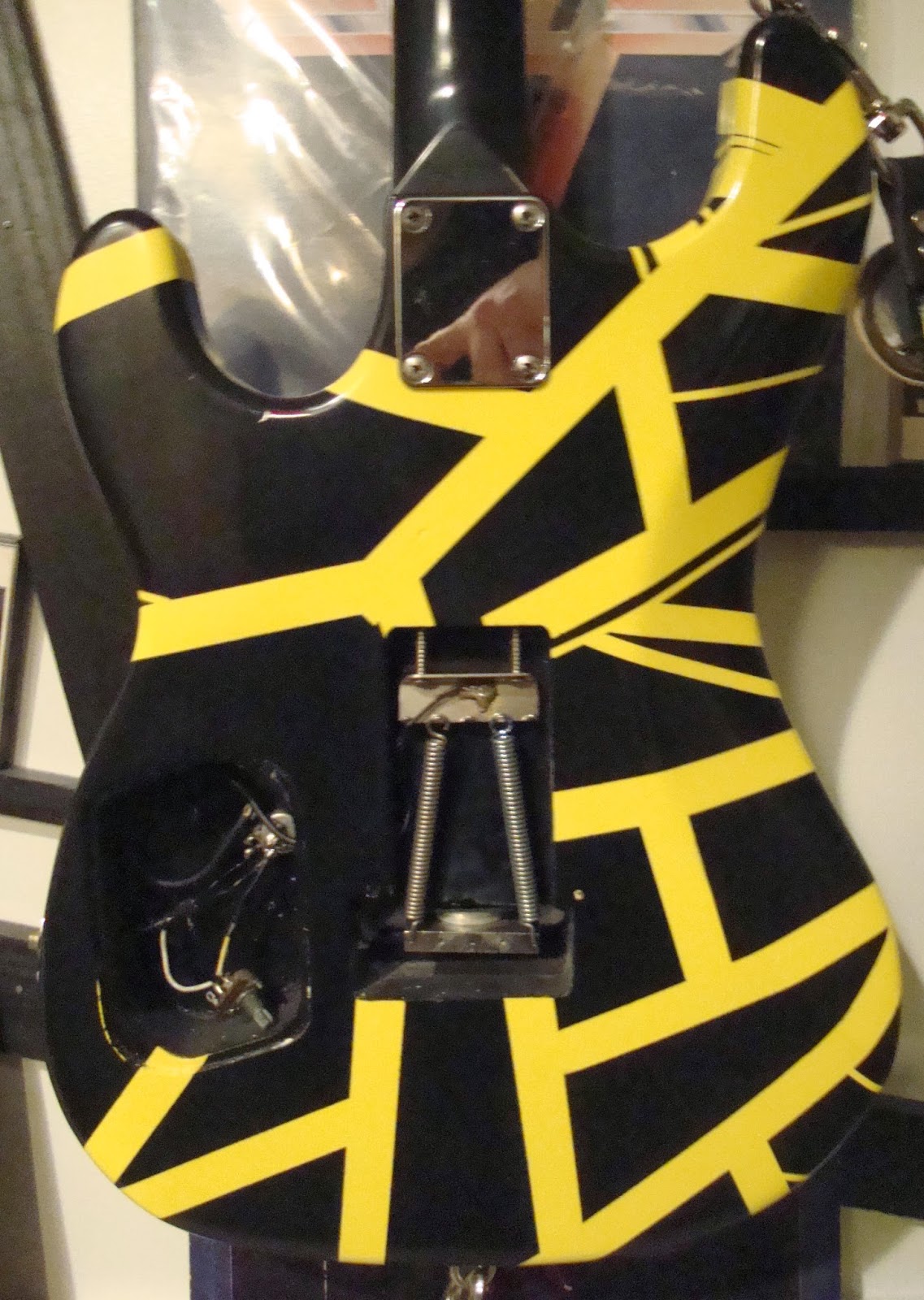 Here's a demo of how this guitar plays:

Promote Your Page Too

Mark Steven Bonta
Hi! Welcome to my blog. I'm a semi-professional musician from Northern New Hampshire, and I started this blog as a hobby to chronicle my obsession of collecting, building and painting guitars. If you are a guitar enthusiast you may find some of the detail and history on this blog interesting. My collection is always changing, so please keep checking back for updates.